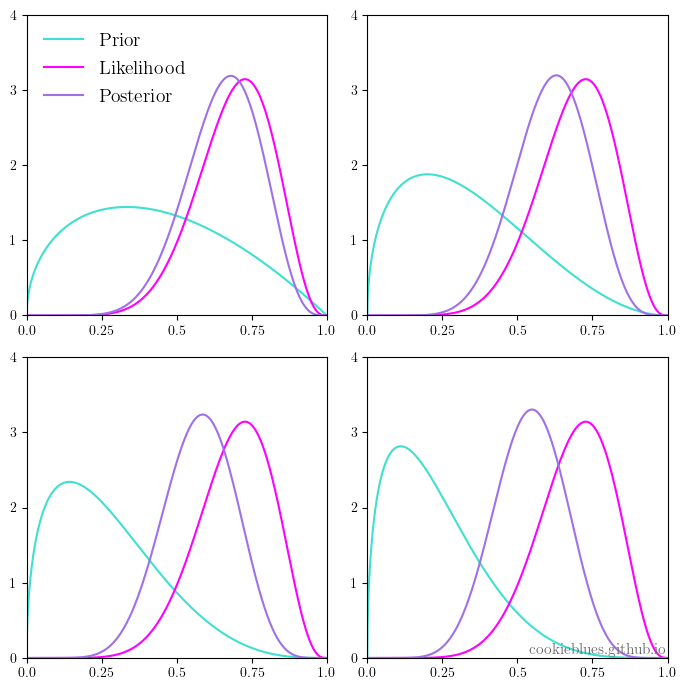 While the adjective “Bayesian” first appeared around the 1950s by R. A. FisherS. E. Fienberg, “When did Bayesian inference become “Bayesian”?,” 2006., the concept was properly formalized long before by P. S. Laplace in the 18th century, but known as “inverse probability”S. M. Stigler, “The History of Statistics: The Measurement of Uncertainty Before 1900,” ch. 3, 1986.. So while the gist of the Bayesian approach has been known for a while, it hasn’t gained much popularity until recently (last few decades), perhaps mostly due to computational complexity.

To understand what this means, I like to use this analogy. Imagine you’ve lost your phone somewhere in your home. You use your friend’s phone to call your phone - as it’s calling, your phone starts ringing (it’s not on vibrate). How do you decide, where to look for your phone in your home? The frequentist would use their ears to identify the most likely area from which the sound is coming. However, the Bayesian would also use their ears, but in addition they would recall which areas of their home they’ve previously lost their phone and take it into account, when inferring where to look for the phone. Both the frequentist and the Bayesian use their ears when inferring, where to look for the phone, but the Bayesian also incorporates prior knowledge about the lost phone into their inference.

It’s important to note that there’s nothing stopping the frequentist from also incorporating the prior knowledge in some way. It’s usually more difficult though. The frequentist is really at a loss though, if the event hasn’t happened before and there’s no way to repeat it numerous times. A classic example is predicting if the Arctic ice pack will have melted by some year, which will happen either once or never. Even though it’s not possible to repeat the event numerous times, we do have prior knowledge about the ice cap, and it would be unscientific not to include it.

which is Bayes’ theorem. This should seem familiar to you - if not, I’d recommend reading up on some basics of probability theory before moving on.

where $\propto$ means “proportional to”.

We’ll start with a simple example that I think nicely illustrates the difference between the frequentist and Bayesian approach. Consider the following problem:

A coin flips heads up with probability $\theta$ and tails with probability $1-\theta$ ($\theta$ is unknown). You flip the coin 11 times, and it ends up heads 8 times. Now, would you bet for or against the event that the next two tosses turn up heads?

For our sake, let’s define some variables. Let $X$ be a random variable representing the coin, where $X=1$ is heads and $X=0$ is tails such that $\text{Pr}(X=1) = \theta$ and $\text{Pr}(X=0) = 1-\theta$. Furthermore, let $\mathcal{D}$ denote our observed data (8 heads, 3 tails). Now, we want to estimate the value of the parameter $\theta$, so that we can calculate the probability of seeing 2 heads in a row. If the probability is less than 0.5, we will bet against seeing 2 heads in a row, but if it’s above 0.5, then we bet for. So let’s look at how the frequentist and Bayesian would estimate $\theta$!

As the frequentist, we want to maximize the likelihood, which is to ask the question: what value of $\theta$ will maximize the probability that we got $\mathcal{D}$ given $\theta$, or more formally, we want to find

Unsurprisingly, the value of $\theta$ that maximizes the likelihood is $\frac{k}{n}$, i.e., the proportion of successes in the trials. The maximum likelihood estimate $\hat{\theta}_{\text{MLE}}$ is therefore $\frac{k}{n} = \frac{8}{11} \approx 0.73$. Assuming the coin flips are independent, we can calculate the probability of seeing 2 heads in a row:

Since the probability of seeing 2 heads in a row is larger than 0.5, we would bet for!

which is called maximum a posteriori (MAP) estimation. To answer the question, we use Bayes’ theorem

Since the evidence $\text{Pr}(\mathcal{D})$ is a normalizing constant not dependent on $\theta$, we can ignore it. This now gives us

During the frequentist approach, we already found the likelihood $(3)$

where $\Gamma$ is the Gamma functionThe Gamma function is defined as $\Gamma (n) = (n-1)!$ for any positive integer $n$.. Since the fraction is not dependent on $\theta$, we can ignore it, which gives us

Note that we end up with another beta distribution (without the normalizing constant).

It is now our job to set the prior distribution in such a way that we incorporate, what we know about $\theta$ prior to seeing the data. Now, we know that coins are usually pretty fair, and if we choose $\alpha = \beta = 2$, we get a beta distribution that favors $\theta=0.5$ more than $\theta = 0$ or $\theta =1$. The illustration below shows this prior $\mathrm{Beta}(2, 2)$, the normalized likelihood, and the resulting posterior distribution.

We can see that the posterior distribution ends up being dragged a little more towards the prior distribution, which makes the MAP estimate a little different the MLE estimate. In fact, we get

which is a little lower than the MLE estimate - and if we now use the MAP estimate to calculate the probability of seeing 2 heads in a row, we find that we will bet against it

Furthermore, if we were to choose $\alpha=\beta=1$, we get the special case where the beta distribution is a uniform distribution. In this case, our MAP and MLE estimates are the same, and we make the same bet. The image underneath shows the prior, likelihood, and posterior for different values of $\alpha$ and $\beta$, i.e., for different prior distributions.

We can now answer this question by ‘integrating out’ $\theta$ as

In this case, if we choose a uniform prior, i.e., $\alpha=\beta=1$, we actually get $\frac{45}{91} \approx 0.49$, so we would bet against. The reason for this is more complicated and has to do with the uniform prior not being completely agnosticA better choice of prior would be Haldane’s prior, which is the $\mathrm{Beta}(0, 0)$ distribution.. Furthermore, we’ve also made the implicit decision not to update our posterior distribution between the 2 tosses, we’re predicting. You can imagine, we would gain knowledge about the fairness of the coin (i.e., about $\theta$) after tossing the coin the first time, which we could use to update our posterior distribution. However, to simplify the calculations we haven’t done that.